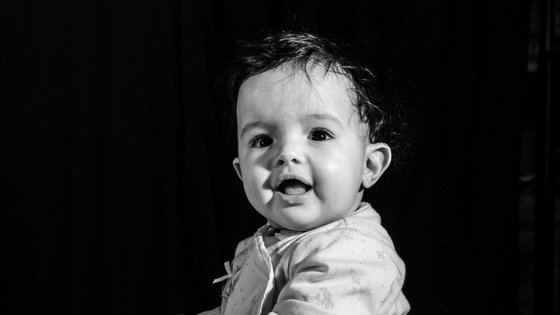 Can you imagine eating food without any teeth? Just with your gums alone? I surely find it hard to picture, but we were once like our little ones. Toothless, like a 100 year old grandma. Luckily, there are first foods for babies with no teeth. And I found 125 of them for you to read about. 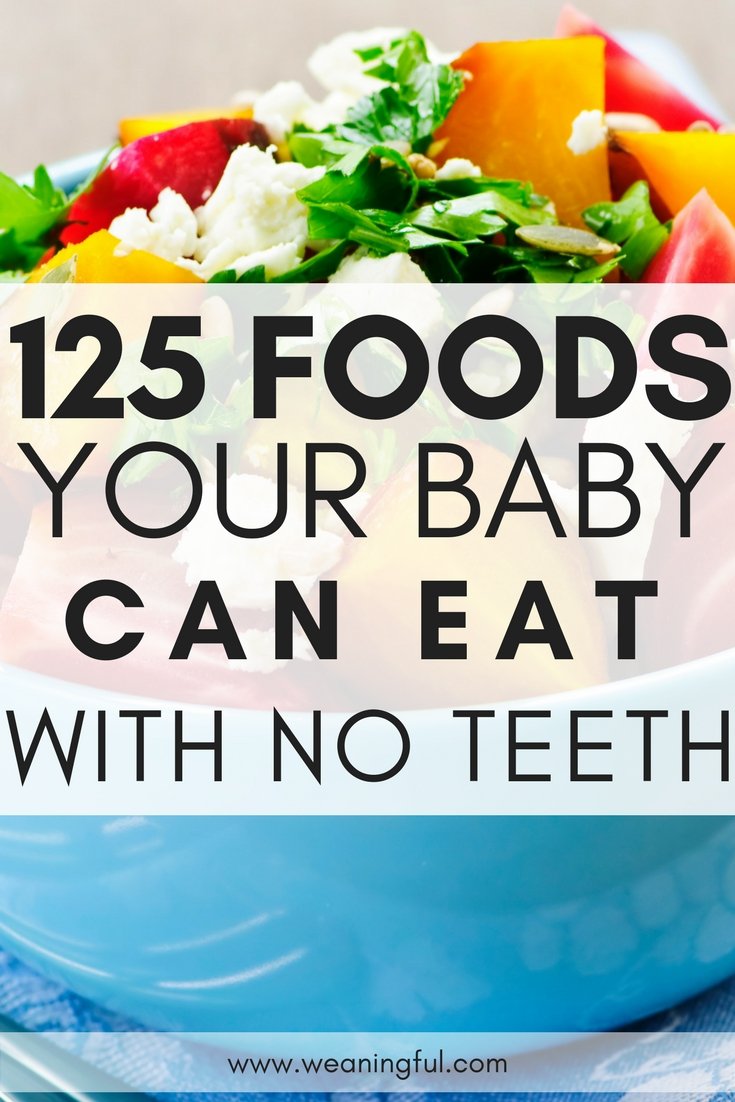 The original article was written back in 2018. This is a 2021 updated version.

Since then, I have re-written and updated this post to reflect the changes I have gone through when it came to my own beliefs/thoughts and how I word things when talking about feeding kids. As such, the remains of the original article can be seen in the comments section. Word of caution, it’s not something that makes too much sense anymore and some parts I am not very proud of. I even considered deleting the comments altogether, but that doesn’t seem just right either. Either way, I hope this article helps you, even a bit.

Yes, the Pinterest pins show blueberries and they are a choking hazard, but do read the entire post. I have tried to give suggestions for each type of food so as to make them safe even for little ones.

If I missed anything, give me a shout. 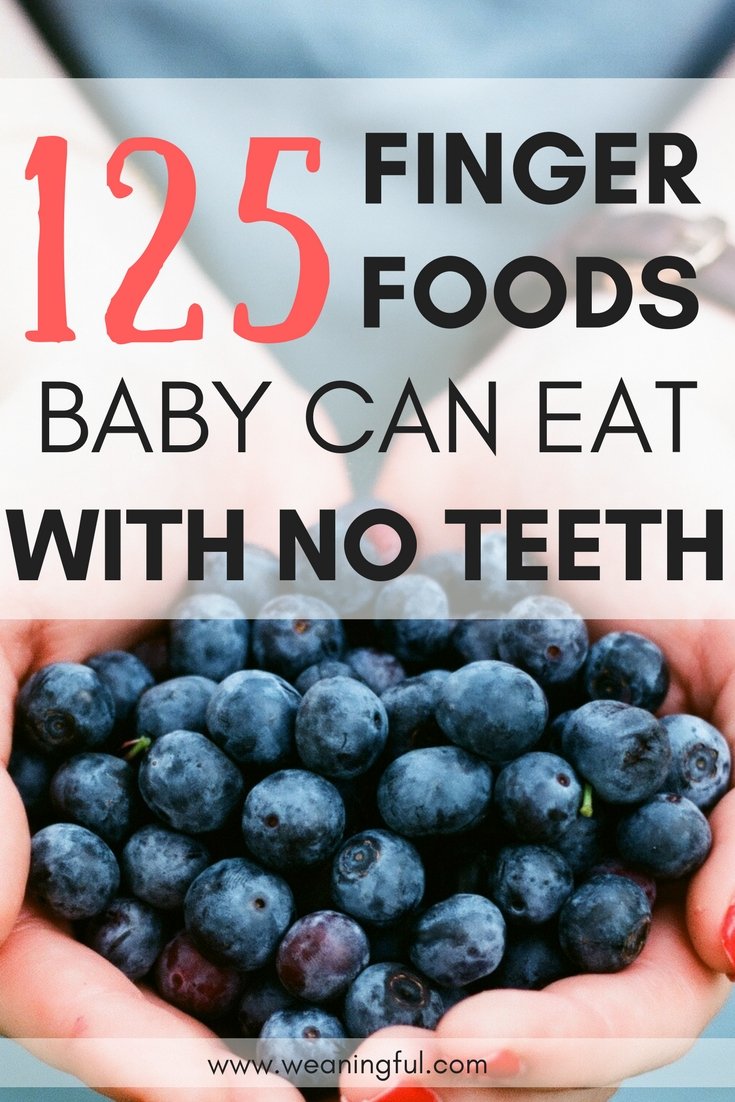 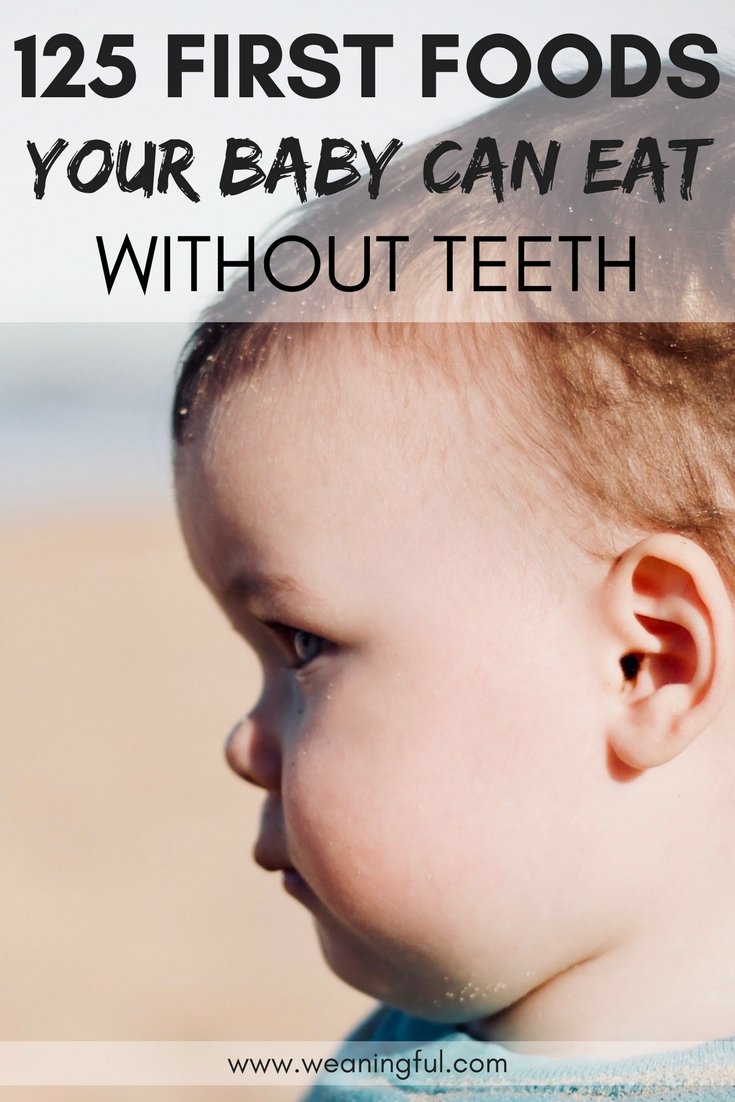 But how can babies even chew without teeth?

Well, the truth is, they don’t need teeth to chew.

Chewing involves movements of the jaw, tongue and cheek. Teeth are used later on to break up more complex fibres.

This is technically done with the teeth that are more at the back of the mouth, called molars. The first molars show up somewhere between 13 and 19 months old, as you can see from the graph below.

So if we were to wait that long before we gave our little ones any food that can be easily munched on with the gums, then we would seriously endanger his or her capabilities of dealing with food (not to mention the fact that after around 8 months, the gag reflex moves further down the tongue and babies might experience a higher risk of choking if they are not accustomed to table foods yet).

Furthermore, babies are already experienced in munching away, because they would have spent a lot of time already with their fingers in their mouth, biting toys and other objects.

So encourage them to explore these with their lips, tongue and jaw, at the same time being careful of any pieces that might come off and increase the risk of choking.

So, assuming little one doesn’t have any teeth yet, what can I give him?

But before anything else, make sure baby meets the three signs he or she is ready to begin in the first place. I cannot stress this enough, guys, and it will save you lots of trouble down the road.

There was a time when the recommendations said to start solids at 4 months+ and I’m not sure that all the baby food manufacturers have come up-to-date with the current official advice regarding infant feeding. Always watch the signs in your baby and judge whether he or she is ready. This usually happens at around 6 months, give or take.

Here you go, some ideas of first foods for babies with no teeth. I also added some notes and suggestions of serving for some of them. This is regardless of the method you use, baby led weaning or traditional. At some point, you’ll have to start giving them table foods.

And because I’m a fan of food groups, I have split them accordingly, for easier reference.

Note: please be aware of choking hazards. I find this article sums up pretty well what are the foods you need to pay extra attention to. As your little one develops his ability to chew, you need to be careful, teeth or no teeth.

As a general rule, go for the ripest you can get, in the beginning, as these are usually softer for babies just starting out.

Eggs (in the UK, those that have a lion stamped on the shell are salmonella-free, therefore the yolk can be left runny when cooked – otherwise please cook the yolk completely)

126. 2 ingredient cookies. The easiest snack ever. Pair it with some dairy and you’re good to go.

127. 3 ingredient pancakes. The fluffiest and easiest pancake recipe out there. Make sure to read my notes on timing and flipping and why those are the key elements for the fluffiness.

128. Spiced biscuits. I think these are great for when little ones are teething.

129. Easy scones. With only 3 ingredients at the base, these are soft and fluffy. Don’t overmix the batter though.

130. A kid friendly brownie with a secret nutritious ingredient.

You are probably thinking: is there anything she hasn’t mentioned?

In fact, I haven’t mentioned the leafy vegetables, like spinach, lettuce, salad etc because babies might have a hard time tearing them apart so as not to stick to the roof of their mouths.

I also didn’t mention pomegranate, because of its high choking risk.

Knowing what to feed your kids might be a little easier now that you have this list, but actually getting them to eat or at least try any food is another story entirely.

This is why I have put together a 7-part blog series about how to get your little one to eat any food. It is based on more than 3 years of feeding little tummies, observing and taking mental notes about everything I did and everything they did at mealtimes.

I think you’ll find it useful and worth reading. You can save it on Pinterest for later reading or share with someone you know.

44 thoughts on “125 first foods for babies with no teeth”