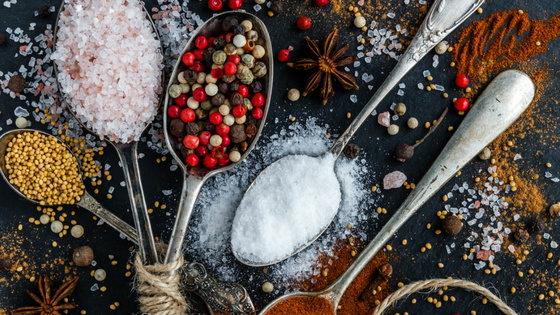 Where I come from there is this saying that roughly translates to ‘like salt in food’, meaning something so dear to you that you couldn’t live without it. Indeed, I have grown so fond of putting salt in everything, that I could not imagine life without it.

My little girl, Emma, on the other hand, knows nothing of this magical ingredient. I hope when she finds out about it eventually she will know to use it wisely and in moderation.

A few words about salt in baby’s diet

The thing with salt is that it can make your baby very ill because his immature kidneys cannot cope with too much of it. So make sure to not add salt to your baby’s meals and avoid hidden salt in processed foods, like ready-made sauces, tinned foods or ready-meals. It is best to check labels at all times (I have become sort of an addict because of this).

If the food has more than 1.5g of salt per 100g it is classed as very salty. As such, your baby shouldn’t have any of it or in the worst case only the tiniest amount. The daily salt limit for a baby 6 to 12 months old is 1g, while for children 1 to 2 years old this limit increases to 2g per day.

As such, the following foods are not suitable for babies to eat:

I saw just a couple of weeks ago a lady on the street offering some fries to her little one. I was baffled, yet I continued to walk away. It is such the society that we live in and such are the times.

Enough about salt. Let’s dive in the main subject of this post, which is about spices in baby’s food.

The complete guide to spices in baby’s food

I hope you are not like me: I used to think only about pepper and cinnamon whenever someone mentioned the word spice. Little did I know there are so many out there.

Indeed the ones I tend to use most for Emma’s food are these two because they successfully replace sugar and salt, respectively. I did not follow a certain rule when adding them to her food, like waiting three days to see if any reaction appears. I don’t use these spices in baby’s food on a daily basis, but I use them often enough to mention them here.

First thing first, pepper. I use it as a salt replacement, adding a pinch to my baked omlette, roast potatoes, mashed potatoes, any type of meat I roast in the oven. I also sprinkle it sometimes over baby-friendly pizza (which is basically a slice of bread, with sliced tomatoes and mozzarella on top, baked in the oven for 10 minutes). It’s important to use just a pinch, as it can make a lot of difference and baby might not like it.

Next up, paprika. Oh, the Hungarians know how to use paprika in their dishes! Whether it’s sweet or spicy, it’s one of those spices that also adds a nice bright colour to food. Be careful about using the sweet one as it might not be as mild as you think! I use it as well for roasting veggies or meat in the oven and goes well in rice or stews of any kind. 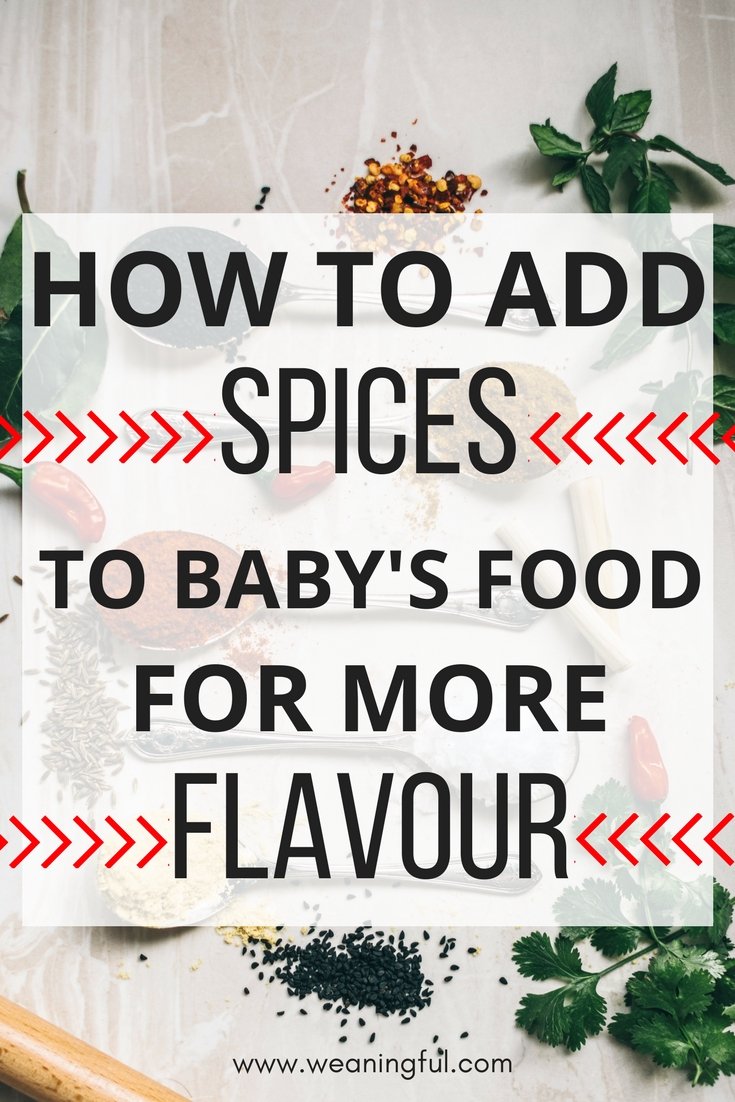 I have only good words to say about herbs like oregano, basil, thyme and rosemary. Actually, these as a group are more commonly known as Italian herbs, but I advise you to buy them separately. I do not use them all on the same type of dish, that’s why.

Oregano and basil go well with everything egg or tomato based, like omlettes or bolognese sauce. They are also good for marinating meat. Thyme is rich in vitamin K and works well with meat of any kind. Use it in meatballs, and even in egg based recipes. Rosemary is a potato’s best friend, of course. Goes well with cauliflower and roasted meat, but pay attention to quantity as it has quite a lot of flavour. Italian herbs can be sprinkled over salads or cheese.

For Indian based recipes, cumin is the way to go. I use it mostly whenever I cook with onion, like in stews or soups for example. Goes well with green beans, corn, potatoes, zucchini or tomatoes.

If you are cooking fish, then sprinkle over some coriander. It’s a good source of fibre and iron and you can also season potatoes with it.

Last but not definitely the least used is cinnamon. You definitely cannot go wrong with it. I use it in porridge or any cooked cereal, in my apple pudding recipe, sweet muffins, homemade biscuits or pancakes. It goes well with apples, pears, sweet potatoes and carrots, all of which have a sweetness of their own. What the cinnamon does is to increase that flavour.

Seasonings I do not use

For the love of all spices, I cannot figure out why would anyone use mint in their cooking. I just cannot bear the idea. If you cook fish, meat or peas often, then mint might be your best bet. Add some to fruit salads if you wish but be careful it can overpower other flavors.

Bay leaves are the only ones in this list which are to be removed once their flavour has gone into the food. If you eat it…. well, let’s just say it’s bitter! I do not like the flavour it gives. If you want to try it out, use it in any potato, bean, chickpea or lentil based dish.

Nutmeg can be found either whole or ground. It is a strong and sweet spice and is frequently used in desserts or pastry. Just a little bit goes a long way, so pay attention to quantity.

I only used sage once in my life and that was to stuff a turkey with. It has a powerful aroma to it and you can pair it with poultry, cheese and vegetables.

Other common spices include saffron, turmeric, ginger, chilly powder, cardamom, cloves, cilantro and allspice. I find these to have too strong a flavour for my taste, but you can nevertheless use them with measure.

To be or not to be a spice, that is the question garlic ask itself.

That depends. In powder form, you can find garlic at the spices aisle. In its fresh form, I consider it to be a vegetable.

I use it in soups, broths, stews, on potatoes, with meat or poultry or as part of sauces. Garlic rubbed on toasted bread with butter is the ultimate indulgence.

All in all, we are provided with so many flavours and magical powders to transform any food into something delicious, without using salt, that it’s almost a shame not to try them at least once.

Get a FREE 7 DAYS VARIETY COOKING PLAN suitable from 6 months and see how I deal with food variety for little ones. (You’ll also receive updates about new blog posts, recipe experiments and Cooking School For Moms emails).

What about you? What combinations do you come up with to give flavour to your baby’s food? I would love to read your thoughts so do leave a comment! Also, sharing is caring, even more so for us busy moms so spread the word on social media!