If I were to summarize this post in a couple of sentences, it would be something like this:

Baby led weaning (aka BLW) is the new kid on the block that everyone wants to meet. Traditional weaning is the kid that lived in the neighborhood since he was born and that everybody knows already. But the ”kid dilemma” as I like to call it is this: either of them can make great pals. Whom do you choose to befriend?

I do not believe in taking sides when it comes to weaning approaches. The answer to the question above is: depends on you and your personality. I think it’s the same with weaning. What works for one baby might not work for another; parents might choose to start with one method and end up doing the other. The good thing is this: this is not an exam, there are no passing marks or prizes to be won, there is no rush to get to a finish line.

Keep that in mind as you read on. You are not competing against your neighbour’s baby who seems to be getting plumper by the day.

– a Cooking School For Moms powered by weaningful.com digital download –

Get a FREE 7 DAYS VARIETY COOKING PLAN suitable from 6 months and see how I deal with food variety for little ones. (You’ll also receive updates about new blog posts, recipe experiments and Cooking School For Moms emails).

Baby-led weaning – the new kid on the block

The term baby led weaning is attributed to Gill Rapley, mother of three and health visitor in the UK. She introduced this approach to weaning in her Baby Led Weaning: Helping Your Baby to Love Good Food book back in 2008. Woah, you’re telling me this term is 9 years old now? How come I haven’t heard about it until recently?

The answer is: you probably didn’t have a kid!

Joke aside, you probably didn’t hear about it because 9 years is a relatively recent time frame, in the sense that if you didn’t have friends that did this with their own babies, you wouldn’t hear it from a family member. Back in your parents’ time, the only way they fed you was using a spoon. And I’m pretty sure your parents’ jaws would drop (or maybe they did already!) if they heard you left your at least 6 months old baby to feed herself.

Because that is what BLW is all about: leaving the baby the choice of what, when, how much and how quickly to eat.

If you think about it, that is a LOT of freedom.

I hadn’t heard about BLW until I was already feeding Emma using a spoon. As time passed, BLW started to make sense. If I were to sit in a high chair, I would like to be given a choice. I would like to take time exploring.

The BLW steps in a nutshell are:

Step 1: offer a milk feed before any solid meal (around 30-40 minutes before, so that baby is not very hungry)

Step 2: sit your baby in a high chair at family meals

Step 3: offer your baby the same food as you (making sure there is no salt added, no sugar, no honey if she is younger than 1 year old and no foods with chocking hazard); food size and shape must be adapted to baby’s abilities.

Step 4: let your baby feed herself: no assistance, just healthy foods she can hold in her fist or with her fingers, that she picks up herself. Gradually, offer pre-loaded spoons that your baby can pick up.

Step 5: trust your baby to eat as much as she likes, what she likes, at the pace she likes.

The arguments in favor of this method are multiple.

On the other hand, concerns regarding this approach are:

BLW is a quite strict term to define a weaning approach. It leaves no room for modified or adapted versions. Anything that includes other steps other than the 5 above is considered to be traditional weaning. Even Gill Rapley offers an opinion on the strict definition of BLW here.

Traditional weaning – the kid everyone knows

Traditional weaning, as opposed to BLW, is the direct intervention of a parent or carer in the complementary feeding of a baby. Intervention means here the use of a spoon or fork to feed the baby. Food is offered in puree form at the beginning, with finger foods being introduced later on.

Gill Rapley clearly states that a mixed method of BLW and traditional approaches isn’t in fact mixed at all, but belongs only to traditional weaning. So if you started your little one with purees and introduced finger foods at the same time, you are not doing true BLW.

In my opinion, what works for your baby is the right way to do things. Some babies do not accept a mushy texture (trust me on this one!). Others might welcome it as something similar to the milk they already get from the breast. Plus, I don’t think belonging to a club is so elite nowadays. Anyone can join a BLW group on Facebook and just browse for support or recipe ideas.

I did say in the beginning of this post that I wouldn’t take sides. What I did with my own baby is considered traditional weaning according to Mrs. Rapley. I’ve had my own share of doubts, people over-reacting when introducing finger foods etc. In the end, I was so happy when Emma started picking individual peas from her table that I told everyone about it! So it can be a bit of both approaches, as long as you give pureed foods only for the first few weeks and baby has the chance to experiment finger foods as well.

So when is it ok to introduce solid (as in not pureed) foods in traditional weaning?

The answer to this question is 8 months at the latest. Why 8 months?

Babies have, up to 6-8 months, a gag reflex that is triggered more forward in the mouth than in an adult’s case. This gagging reflex helps the baby spit out any food that they consider too big to be swallowed. It is a kind of defence mechanism, if you wish, against chocking.

Now, after around the 8 month mark this gagging reflex starts to move down towards the airways until it reaches the same point as an adult’s. This happens at around 12 months old. Therefore, any lumpier food that you introduce after 8 months will be harder to manage by the baby and more likely to cause trouble.

Babies need to get used quickly to foods other than purees. They will gag a lot in the beginning, because of what I said earlier, but that will teach them to proper process the food before swallowing it.

I remember panicking a lot when Emma used to turn red in the face and start coughing up bits of food. But all was well and the only ugly incident worth mentioning is some bit of apple getting stuck to her throat. Never let a baby eat from a whole unpeeled apple!

Tip: to distinguish between gagging and chocking remember this tip. Loud and red, let them go ahead. Silent and blue, they need help from you!

What are your experiences with BLW or traditional weaning? Would you do anything differently? Let me know in the comments below! I’d love to hear your stories! 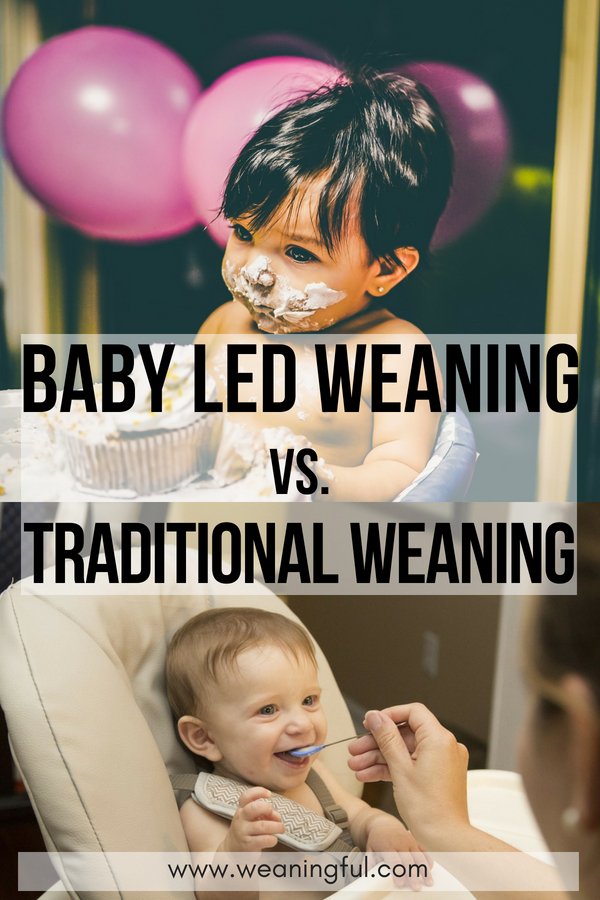