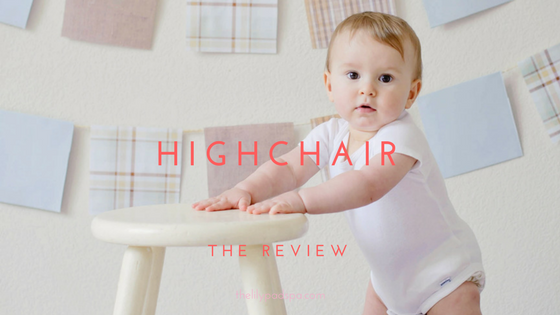 Oh, the highchair: that first purchase that really matters when it comes to weaning. It is the place where your baby will spend quite a lot of time after 6 months of age until around…. well, until he figures out how to jump out of it I guess! It’s kind of like baby’s ‘first car’, that first purchase that gives him an identity, that he can ‘use’ to see the world differently and from another level.

We were so into finding the best highchair on the market, that simply going for Ikea’s Antilop wasn’t going to do it. I remember my husband subscribed to Which.co.uk for a one month-one pound trial just to see what they reviewed and which was the overall winner. In the end, we did buy their number 1 recommendation.

Now, before I go deeper into this business, I want to just say this: by looking at Amazon’s best selling highchairs for babies list, it is clear to me that despite having more and better reviews than the top choice brands, Graco is positioned rather low. Not to mention they have 5 (!!!) best sellers as compared to 1 or 2 of their competitors’. Here is the complete list if you find that hard to believe.

Why is it that Graco sells less? I tend to believe that parents do compromise when it comes to price, which is a shame really. And second, Graco isn’t the most space-friendly highchair out there when opened. But since this review is written by someone who lives in a 16 square meters room most of the time, I’d say that argument doesn’t always stand.

How to choose the best baby highchair

There are several factors we need to look at.

Would you rather have a bulky highchair that you constantly bump into at meal times or a slim one which you barely notice is there anymore?

Like I was saying above, Graco isn’t the tiniest of highchairs on the market. However, it is marketed as the slimmest foldable highchair in their range! Take that Ikea! I mean, the Antilop might look slim and sleek, but it doesn’t fold. That means you’d have to invent a ball game or something to use it for when it’s just sitting around in your dining room/kitchen/only room you’ve got. And the only way to get rid of it would be by disassembling it lol!

Graco on the other hand folds to a neat 7.5 inches and it’s a space saver: it goes neatly into your pantry when you need the extra space in the kitchen or something. For the price difference, I’m willing to go for it, thank you very much!

Not to mention it sits on its own while folded! No need to rest it against a wall or something.

Moms need a highchair that is easy to open, fold and move around, and even better if they can do this with one hand. The other one is presumably busy holding the baby.

Opening and folding are not one-hand jobs when it comes to the Graco, as much as I would like to say so. Oftentimes I find myself picking the baby up for her meal and then having to put her down again just to set up the chair. It comes with a mechanism that needs both hands in order to effectively open.

On the plus side, the front wheels come equipped with small wheels that can be put out when you want to move the baby’s highchair around let’s say.

First, the chair itself needs to be adjustable by height. You want to make sure it reaches your table, grandparents’ table, even your neighbour’s table if she’s doing the babysitting for you! The Graco has 6 positions to choose from, so that’s babysitting sorted!

Second, the tray should adjust to leave room for baby as she grows. The Graco even allows for it to be removed completely, leaving only a smaller snack tray underneath.

Thirdly, seat reclining. Now this is something I wouldn’t personally bother with, because I think baby should sit upright when eating to prevent chocking and nasty accidents. But if you’re looking for this feature, most of the chairs have 3 positions for the seat, including the Graco.

Fourthly, the seat needs to have a belt to strap around baby. Now this is especially necessary in the first few months of weaning. I noticed as Emma grew older, she wouldn’t need those anymore. You’re looking for a 5-point harness as the safest option out there. I find a 3-point one rather risky, to be honest.

The best highchair is a BLW highchair. And this is not taking sides, it’s a standard for the below.

First, is it easy to clean? . It needs to have a detachable seat pad so that you can wash it without working around to find the dirty corners where the food generally ends up. The tray must be removable. And then there should be another tray to replace the first one. Most chairs do have a double tray system so you should be alright. The Graco even has a third one, which is not detachable and sits at the very bottom. It is small and can be used to hold a cup and some small snacks for baby to pick up.

Secondly, are the trays dishwasher friendly? Just pop them in there and forget about them. The seat pad must be washing machine friendly, so no plastic is fantastic please! We ain’t got no time for that, Ikea! Plus, I’ve seen pictures of that one getting stained quite easily, so imagine if you give your little one some blackberries or strawberries for breakfast!

Thirdly, you might want to see if the highchair has a foot rest. Some children might like to have their feet up on it, some don’t. Some might bang loudly against it, others won’t.

Now this isn’t a BLW related characteristic, but fashion is important for some people. They might want their highchair to match their kitchen top or table colour. If you are that type of person, just know that Graco has mostly neutral grey coloured highchairs. This might be perfect for someone who doesn’t want to go all pink or blue when it comes to baby colours. Ours is green and white, but because we bought it on Amazon UK at that time.

Lastly, just look at that highchair that you have in mind. Do the three S test: does it look sturdy, safe and simple (to use, to clean, to store)? If not, maybe you want to look at a Graco.

Let me know in the comments down below if you have any questions or maybe experiences with various highchair brands so that others are in the know as well. Also, sharing is caring, even more so for us busy parents so please spread the word on social media!

8 thoughts on “How to choose the best highchair”