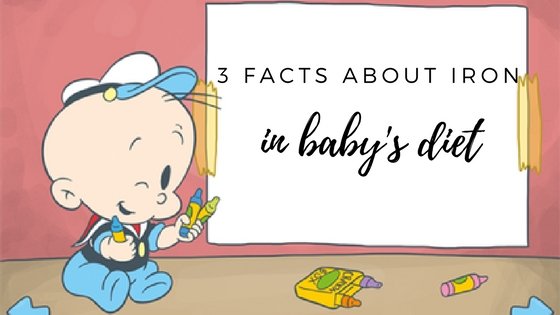 I am going to tell you 3 facts connected to iron in baby’s diet, one of which is actually a trick you can do to boost the iron absorption.

In my previous post I talked about food groups and how they matter in the overall weaning process. I also said there that meat and meat alternatives is the most important food group of all.

Let me explain why.

1. Baby’s iron reserves decrease and are insufficient after around 6 months

I am going to show you a picture. It’s said that a photo is worth 1000 words, right?

Probably this is a money maker for all the baby cereal brands out there. Iron fortified cereal mean more sales, as moms fall into the trap of good marketing.

Also, it gives those “start weaning at 4 months” supporters a base for their reasoning: if you start weaning early, you will avoid anaemia (lack of iron means less red blood cells in your body and those are responsible for carrying oxygen to the organs and muscles).

So you see the 6 month mark again. Add this to the three signs that babies show on average at 6 months and you get the perfect timing to start weaning your little one.

2. Iron is of two types: heme and non-heme

Not all iron is created equal.

Heme iron is the iron you can find in animal protein, such as red meat, fish and poultry and has an absorption rate of 15 to 35%.

Non-heme iron is the iron you can find in plant foods such as green leafy veggies, beans and nuts, or eggs. The absorption rate is between 2 and 20%.

Now you see why it’s imperative to start weaning with good iron sources and get baby used to eating meat and green veggies.

Make sure you serve your iron-rich source alongside a vitamin C – rich source. It has been proven that ascorbic acid (vit C) helps the absorption of the non-heme iron and can reduce the inhibiting effect on absorption that tea or calcium may have.

There haven’t been found significant differences in the absorption of heme iron at meals where vitamin C was present. However, since heme iron is more easily absorbed, it shouldn’t be much of a concern.

So how much iron does baby need?

I found that the recommended daily allowance for babies up to 1 year old is 11 mg of iron. This amount drops to 7 mg per day until the age of three.

In 2011, there were 300 million children in the world who were suffering from anaemia. A WHO study shows that the risk for anaemia starts from the baby’s time in the womb. A mother who is iron deficient may give birth to a baby who has anaemia herself or will have it later in life.

You can find some great sources of iron in my post about 125 foods that you can give to babies with no teeth.

6 thoughts on “3 facts about iron in baby’s diet”