This is a recipe from Gill Rapley’s book Baby Led Weaning Cookbook, which you can grab here. A full in-depth review will follow shortly on the blog. So far, everything I have cooked from it has been a success and it really gives you plenty of options.

Now, this recipe came just in handy for me cause I had this leftover oatmeal that I had bought a while ago. I admit, the fact that it is iron fortified was the thing that won me over. After I had a taste and Emma had quite a few breakfasts based on it, we decided not to continue eating it as such.

This post contains affiliate links, at no extra cost to you. For more info, read my disclosure page.

If you are wondering what oatmeal is, it’s practically the same thing as rolled oats. Mine was in powder form, though, because it was meant for children (?!?). Why would you blitz oats in a blender anyway? Children can handle the texture of normal oats just fine.

So if you do have some forgotten oatmeal somewhere in your pantry and you are tired of cooking porridge every time, then give this baked oatmeal cake a go.

What do you need to make this recipe? A 500 g (1 lb) loaf tin. If you’re wondering if it’s worth the investment, you can also make puddings in it or homemade bread.

What’s in this baked oatmeal cake? You have cereal (the oatmeal), fruits (apple and/or banana, dried fruit), dairy (the milk) and protein (the egg). All four food groups covered at once!

It keeps well in an airtight container for a couple of days, so that’s breakfast or snack sorted!

Make sure you use an apple with plenty of flavour (and maybe add the overripe banana as well), as in sweet enough to give the cake some flavour. Of course, the cinnamon does it’s thing too, but it can’t make up for the sweetness of the fruits. I left out the raisins because I didn’t have enough and didn’t want to waste time prepping those as well.

This baked oatmeal cake makes a great finger food for babies who are just starting on their solids and a good way for them to practice that pincer grasp.

Happy cooking! Let me know in the comments if your little ones enjoyed it! Also, sharing is caring, even more so for us busy moms, so please spread the word on social media! Print Recipe
Baked oatmeal cake
A quick way to use leftover oatmeal and cook a healthy and nutritious breakfast for your baby, toddler or picky eater. Great for baby led weaning, first foods, finger foods and improving that pincer grasp. 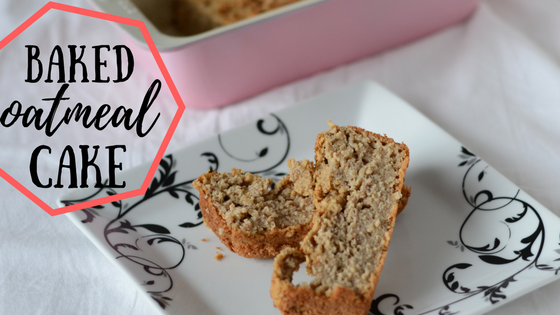